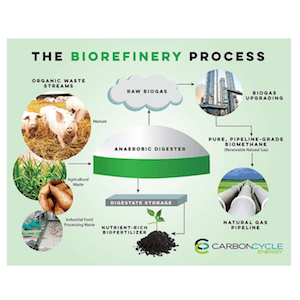 The $100-million facility, located on 82 acres in southeastern North Carolina, is the first in a pipeline of large-scale anaerobic digestion and biogas treatment facilities planned by Carbon Cycle Energy (C2e), the renewable energy development company based in Boulder, Colo.

Upon completion in late 2017, the biogas facility, known as C2e Renewables NC, will process in excess of 750,000 tons of organic waste per year. It will produce enough fuel annually to generate approximately 290,000 MWH of electricity, far surpassing the capacity of any other standalone facility in the U.S., according to C2e CEO James Powell.

C2e has already signed contracts to supply 100 percent of the plant’s output of biomethane to the utility giant Duke Energy and a second, unnamed Fortune 500 company.

At full capacity, the plant will generate 6,500 dekatherms of biomethane per day, equivalent to roughly 50,000 gallons of diesel fuel. Biogas (also called renewable natural gas) is a clean-burning, “carbon-neutral” alternative to fossil fuels.

“The sheer size of this project means that it will have a huge environmental impact both by addressing the major pollution problem caused by greenhouse gas emissions from decomposing food and animal waste, and by producing an alternative to fossil fuels in commercially significant volumes,” Powell said.

C2e has secured access to a variety of organic waste streams, comprised of manure and other agricultural waste as well as industrial food processing waste, which will be converted by anaerobic digesters into raw biogas, upgraded on site, and injected directly into the natural gas pipeline system.

C2e chose North Carolina’s Duplin County as the location for its first project based on its proximity to a natural gas pipeline and its optimal access to large volumes of agricultural and food waste.

With over 530 hog operations, Duplin County has one of the highest concentrations of hog farms in the world. Processing swine waste via anaerobic digestion has been proven to dramatically reduce local emissions and nuisance odors, while also minimizing the potential for water contamination.

Jerry Kovacich, COO and co-founder of C2e, described the company’s sophisticated waste transport system design approach as one that maximizes the use of “closed-system to closed-system” technologies.

“By ensuring that vital energy value is not lost in the form of fugitive air emissions, odors are also dramatically reduced. Residents near our plants will actually be exposed to fewer odors and less risk of water contamination than what’s often been experienced by neighbors of hog farm and pork processing operations in the past,” Kovacich said. 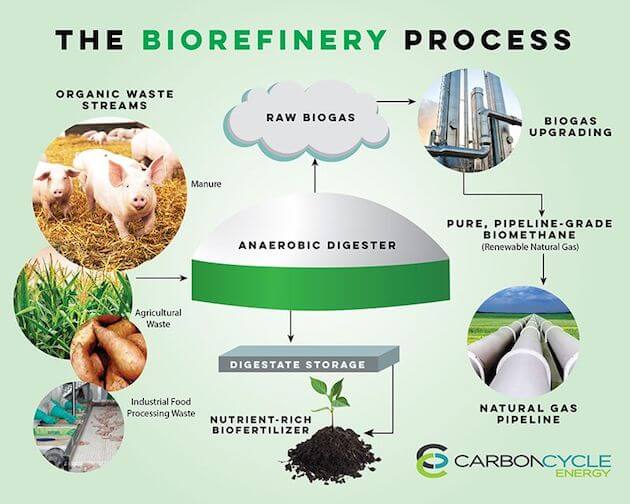